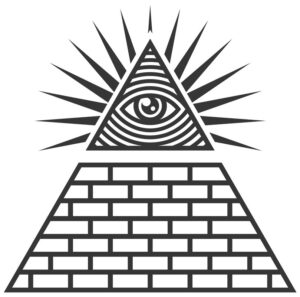 The Illuminati (plural of Latin illuminatus, ‘enlightened’) is a name given to several groups, both real and fictitious. Historically, the name usually refers to the Bavarian Illuminati, an Enlightenment-era secret society founded on 1 May 1776 in Bavaria, today part of Germany, by Adam Weishaupt. The society’s goals were to oppose superstition, obscurantism, religious influence over public life, and abuses of state power. “The order of the day,” they wrote in their general statutes, “is to put an end to the machinations of the purveyors of injustice, to control them without dominating them.”The Illuminati—along with Freemasonry and other secret societies—were outlawed through edict by Charles Theodore, Elector of Bavaria, with the encouragement of the Catholic Church, in 1784, 1785, 1787, and 1790. During subsequent years, the group was generally vilified by conservative and religious critics who claimed that the Illuminati continued underground and were responsible for the French Revolution.

In subsequent use, “Illuminati” has referred to various organisations which have claimed, or have been claimed to be, connected to the original Bavarian Illuminati or similar secret societies, though these links have been unsubstantiated. These organisations have often been alleged to conspire to control world affairs, by masterminding events and planting agents in government and corporations, in order to gain political power and influence and to establish a New World Order. Central to some of the more widely known and elaborate conspiracy theories, the Illuminati have been depicted as lurking in the shadows and pulling the strings and levers of power in dozens of novels, films, television shows, comics, video games, and music videos.

There is no evidence that any present-day groups have any real connection to the historic order. They have not amassed significant political power or influence, and most, rather than trying to remain secret, promote unsubstantiated links to the Bavarian Illuminati as a means of attracting membership. In the end the historical Illuminati were a short-lived fraternity that had very little actual influence but has grown much more substantial in the imagination of the public over the years.