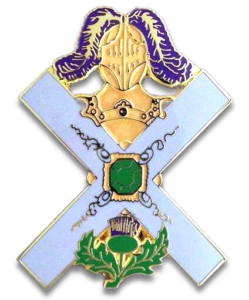 The Knights of St Andrew (KSA) are a Masonic service group. It is specifically part of the Scottish Rite. It was founded in 1993 in the Valley of Tulsa, Oklahoma, by the late, Ill. Weldon Good, 33. The by-laws stated that the Knights of St. Andrew are a “Black Cap” group. A member who receives the honor of KCCH – Knights Commander of the Court of Honor – can not hold an office or vote but they can continue to work and assist. The main duties of the Knights of St. Andrew were and are, to assist, as needed, during a reunion and to be available to the Valley’s General Secretary for any assigned duties.

Initially there were chapters only in Oklahoma, in Tulsa, Guthrie and McAllister. Later on it kept growing and additional chapters were founded throughout the Southern and Northern jurisdictions of the Scottish Rite. There are now chapters in over 180 valleys. Some Chapters have elected to use the names, Order of the Thistle, or Scots Guards. Not only the names and the logos, but also the dress differs from valley to valley. Some use kilts and Glen Gharry caps, while others prefer the black Scottish Rite caps and suits or tuxedos.

One thing all Knights of St Andrew chapters have in common is that it is an organization of and for Black Cap Scottish Rite Masons designed to assist with and give service to their Valley. It is mostly joined by members who go beyond simply attending meetings but are deeply involved and happy to serve.