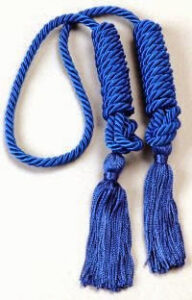 The cable-tow is a length of rope that was used by our operative Masonic forefathers for a multitude of purposes. They used it to bind together heavy objects on floats or rafts, to ensure safe transport to the worksite. It was also used to secure the workers at the job sites. The longer the rope, the higher the worker was able to stand at the building site. This indicated a more advanced and experienced workman.

In speculative Freemasonry the cable-tow is used to dress a candidate during the initiative degrees. It symbolizes several different and unrelated meanings. One thought is that the degrees represent a symbolical rebirth of the man into a Mason, the rope therefore represents an  umbilical cord that binds the candidate to the fraternity.

Another way to interpret it is to look at the rope as a physical bond or shackle that the candidate throws off once he becomes a Mason by completing the obligation and pledging on his honor to uphold the principal tenants of Freemasonry. Brotherly love being stronger than any physical restraint.

This physical bond can also be viewed as the tyranny of passions, ignorance and spiritual slavery that man suffers under before being liberated by becoming enlightened through Freemasonry.

These are just some of the many possible interpretations of this ancient symbol.