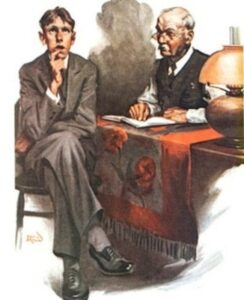 What does this strange word mean and why do you do it?

A catechism is a series of fixed questions, and answers, used for instruction. In Masonry we use it to teach new members about the ideals and philosophy that Freemasonry is based upon.

It is a dialog between two fictional Masonic brothers who have never met before. The one is trying to verify that the other is a legit member of the fraternity by asking open ended questions that the other must correctly answer. It is in old English and the language itself can be very confusing to new members. The questions can be as simplistic as “what color is the sky”, with a simple one word answer: “blue”. Or it can be as basic as: “what happened?”, followed by an entire paragraph of answer.

The catechism is broken down into three distinct sections. The first section recaps what happened to the candidate in the actual degree. The second is an in-depth explanation of the reasons behind these actions. The final section is a more general explanation of freemasonry itself.

New members learn this catechism through the help of more senior ones. This is also an opportunity to get to know the other members of the fraternity and become personally engaged. Freemasonry is a lifelong brotherhood, some might call it a way of life. The catechism is the first opportunity for many new members to truly meet their new brethren, and learn about their personal lives and what makes them “tick”.

It is also an opportunity to learn what the words of this archaic language mean. The students are encouraged to ask any questions that they might have, and explore the answers with the guidance and feedback from the more experienced, senior members of the lodge. After all, there is no one spokesman of Freemasonry whose word is the only answer. Each member is encouraged to find their own truth, even if that truth changes and grows as more knowledge is gained over time.

Different lodges have different traditions. In some Grand Lodges it is legal and encouraged for the candidate to use a “cipher” book, or even plainly spelled out text. While in others, such as the Grand Lodge of Texas, it is only possible to do the catechism work from “mouth to ear”. This means that the brothers need to speak and repeat the questions and answers. Nothing can be written down. Finally, some lodges ask the questions and the student has to state only the answers. While in other lodges, such as Austin Lodge No. 12, it is the tradition for the student to state both questions AND answers, thereby examining himself.

Once the student has learned the catechism to a degree that he and his mentor are comfortable with, he will have to repeat it in open lodge, in a called meeting, in front of his brothers. If they agree that he has recited it to a satisfactory level, then the student will be called proficient. Once a mason passes the proficiency examination, then he is eligible to take the next degree.