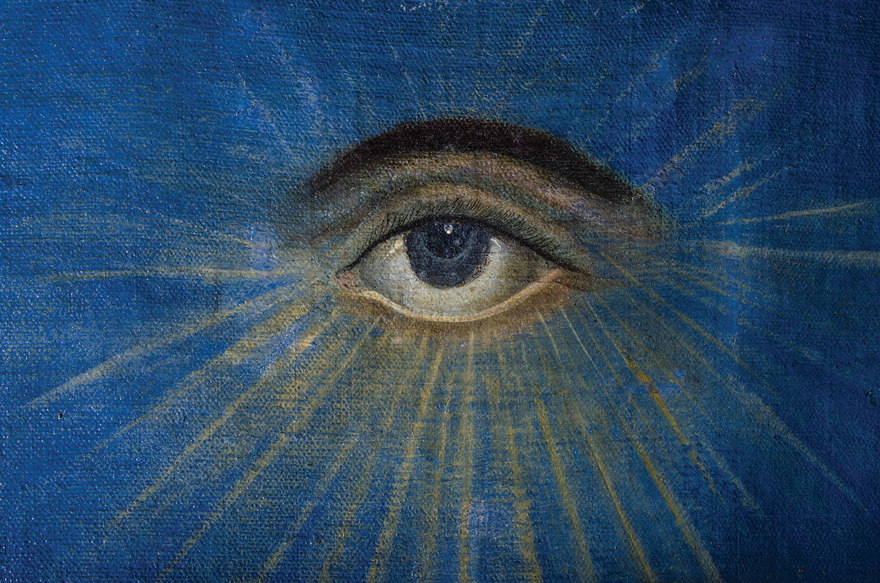 This eye is known by many names. It is referred to as the masonic eye, third eye, or eye of the universe. In the combination with rays that emanate outwardly it represents the sun as the source of all the light. Masonically light represents knowledge and truth.

In ancient times the eye was used as a symbol of the Egyptian god Horus. He gave his eye to Osiris to help rule the underworld. Osiris ate the eye and was returned to life. Thus, the eye was seen as a symbol of life and resurrection.

In more recent history, more specifically the Renaissance period, the eye was commonly called the all-seeing eye, or eye of providence. This has been a very Christian icon. The eye invokes the ever-present watchful eye of god that sees and knows all. It reminds us to follow God’s teachings and maintain his moral standards. This interpretation is supported by the following quote of the bible from Proverbs 15:3, “The eyes of the lord are in every place beholding the evil and the good.” The rays represent God’s omnipresent glory that radiates outward into the darkest corners of life. It also demonstrates a form of spiritual illumination or revelation. Providence refers to the Christian concept of divine guidance. Therefore, the symbol of the eye is meant to show the pious believer the righteous way.

These depictions of the all-seeing eye are exceedingly common in European Renaissance art and church iconography. Most churches constructed during that time have depictions of this symbol in a prominent placement, most commonly above the altar or above a statue of Jesus Christ.

Well after the renaissance period had ended, and the enlightenment period was in full swing was when Freemasons officially started to incorporate the symbol. The earliest recognized use of the all-seeing eye in freemasonry was in 1797 when it appeared in the publication of Thomas Smith Webb’s The Freemason’s Monitor. Here the eye is meant to remind the mason that his actions never go unseen. The Grand Architect of the Universe is ever watchful. An earlier use of the eye of providence by a freemason was by the first known non-operative “gentleman mason”, Sir Robert Moray. He became the first real speculative “freemason” when he was admitted to the Lodge of Edinburgh on May 20, 1641. His official personal private seal included a radiant eye. “This seal has been preserved on a letter from Robert Moray to the Earl of Essex, now in the British Library, London.” (Ovason, Secret Symbols of Dollar Bill, 57)

The most famous use of the all-seeing-eye is on the One-dollar bill of the United States of America. It displays the Great Seal of the United States, which itself was based on a design created by William Barton of Philadelphia, when it was created in 1782. Considering that the Great Seal, as well as the design for the one-dollar bill were published seventeen years before Bro. Webb’s The Freemason’s Monitor, it is safe to assume that the popular conspiracy theories regarding the currency indicating a masonic connection are at best fanciful. The most likely explanation is that this use indicates the deep Christian ideals that the founders of this nation, as well as the artist William Barton held.