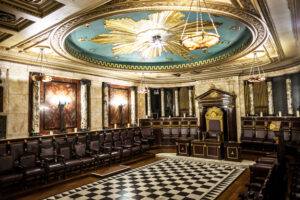 Each lodge is based around five foundational principles. The lodges might differ in their approach and the extent to which they value each one. Nonetheless, each one will be present in every lodge.

Charity
Freemasonry encourages charitable behavior. Lodges can offer scholarships, organize fundraisers for worthy causes, or do cleanups in local parks. Some focus on needs of the local area, others on helping their membership and families such as widows and orphans, and others support regional or national causes. The actual charitable action might differ for each lodge, but the idea remains.

Esotericism
This is one of the more misunderstood ideas in freemasonry. The simplest definition of esotericism is “internal knowledge”. This is information that can be easily misunderstood if taken outside of its context. Examples include the ancient titles and language that freemasonry uses. This is also displayed in the symbols that are so frequently utilized. Many people confuse esoteric with occult. However, occult has an additional layer of meaning, that of being about supernatural forces or powers.

Fellowship
Freemasonry is the world’s oldest fraternity. It encourages members to become brothers not only in name, but also in deed. Members enjoy each others company outside of lodge meetings and become close friends. Many adult men find it difficult to gain new friends, or open up and show vulnerability around other people. Masonry gives them the opportunity to do so in a supportive environment.

Ritual
Each lodge practices ritual whenever they engage in meetings, funerals, officer installations, or candidate initiations. These rituals are standardized throughout the entire jurisdiction of the Grand Lodge that a particular lodge belongs to. It is considered of great importance to practice the rituals as precisely as possible, and is oftentimes a source of great pride when a lodge performs a degree exceptionally well.