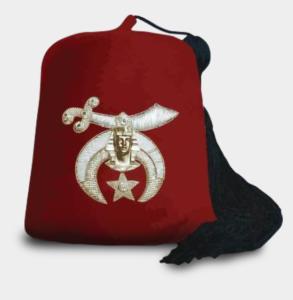 Shriners, or as they are known by their full title “The Ancient Arabic Order of the Nobles of the Mystic Shrine” (A.A.O.N.M.S.)” are one of the best known masonic organizations. Members wear red fezzes and use middle easter titles and themes. In order to join one has to be a 3rd degree Master Mason. This was changed in the year 2,000. Before then all members had to be either a Knight Templar of the York Rite, or a 32 Degree Scottish Rite.

The Shrine was started in 1870 and has become the social arm of freemasonry. They encourage fellowship and offer many opportunities for their members to socialize in their many diverse clubs. Clubs will be formed around the interests of the members of that local shrine, and can include hobbies such as hunting, craft brewing, board gaming, fishing, motor bike riding, music, star gazing, wood working, or many more.

Shriners are known for their fun circuses and the tiny cars in local parades. These, along with the Shriners Hospitals Golf Tournament, are used as fundraisers to finance the many charities they support. But the main charity are the Shriner Children’s Hospitals. These hospitals will treat the patients free of charge and offer world class services.

The Shrine has a Women’s Auxiliary body that is called the “Daughters of the Nile”. This was formed in 1913 and has several local lodges named “temples” to help support the local Shrine chapter and the Shriner Children’s Hospitals.

Masons who are interested in charity, or enjoying the more social aspects of the fraternity, would be well advised to join the Shrine.