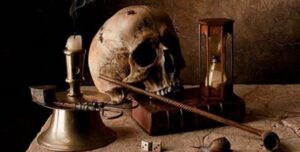 While the concept of death does play a role in its usage, the Masonic application of the skull is not related to piracy or poison. Today, the skull and crossbones appears at Masonic lodges in Chambers of Reflection and in tracing boards used to teach Masonic beliefs and traditions. Freemasons sometimes refer to their fraternity as a “Gentle Craft,” and though the skull symbol appears grim, it has underlying layers of hope. Throughout history, the skull and crossbones has symbolized the concept of “memento mori,” which translates from Latin as “remember death” or “remember you must die.” In his essay, “The Symbol of the Skull and Crossbones and Its Masonic Application,” Brother P.D. Newman of Tupelo Lodge Number 318 observes that this remains true for the Masonic symbol, stating the the skull “stands as the primary reminder of the grim truth that death is ever immanent.” This reminder seeks to incite contemplation and reflection in life.