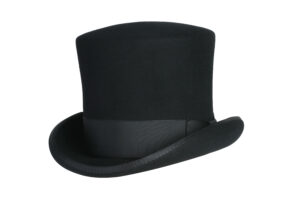 Why does the Worshipful Master of a lodge wear a hat?
The question should rather be: “Why does no one one else wear a hat?”

Wearing a hat in lodge is a privilege that is afforded only to the Worshipful Master of a lodge. While the lodge is session, no one else is allowed to wear a hat. The hat worn by a Master is a reference to the crown that was worn on the head of King Solomon. In history, kings wore crowns as a sign of their rank. Those in his presence removed their hats as a sign of respect to the king.

The ancient Romans prayed with their heads covered. Those that were free born wore pileus or woolen caps. Romans slaves were not allowed to cover their heads while praying.

In the United States, Worshipful Masters wear Masonic hats whenever a lodge is in session. Some Grand Lodges require that the hats must have a brim. Others do not have this requirement. They only insist that the head of the Worshipful Master must be covered.

The choice of headwear is left to the Worshipful Master himself. In England, Scotland and Ireland the tradition is that the Worshipful Master wears a top hat. This tradition moved to the  USA when the first Grand Lodges were established in this country. Several Grand Lodges such as Massachusetts, Pennsylvania, and Virginia still follow this tradition. Other places such as Texas use more regional options. In Texas a nice cowboy hat is a common hat you will encounter. But in most Grand Lodges it is the choice of the officer himself, and can be as far ranging as a fedora, homburg, tyrollean, panama, sombrero or even a wizard hat. This allows the officer to use his creativity to display his own personality.