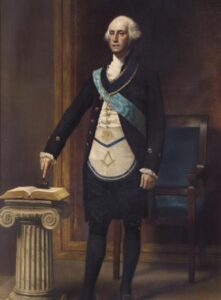 Out of the 46 presidents of the USA, 14 were Master Masons. One more (LBJ) had been initiated as a 1° Entered Apprentice, but he never completed his masonic journey. That is over 30% of all the presidents in the history of the USA. Considering that the average masonic membership of the USA male population has been between 1.25 and 3%, that demonstrates a significant influence on the highest levels of political power.

The following presidents were freemasons:

Other presidents with masonic ties are:

Thomas Jefferson – there is no written records of his lodge membership, even if he is often considered to be a Mason by both historians and Freemasons.
Lyndon B. Johnson – he was initiated as a 1° Entered Apprentice Mason at Johnson City Lodge 561, but he never became a 3° Master Mason.
Ronald Reagan – on February 11, 1988, he was made an honorary member on sight of the Scottish Rite – SJ and the Shrine.
Bill Clinton – he was a member of the masonic youth organization – DeMolay.