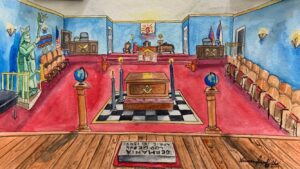 Regular Masonic lodges work the first three Masonic degrees, rather than the appendant Masonic orders such as York Rite and Scottish Rite. They are also called craft lodges. All lodges belong to a Grand Lodge and are members of their system (AF&AM, or F&AM). The system that the particular Grand Lodge belongs to will dictate the ritual used in the standard lodge operations.

However, there are a select few lodges left that are using the Red Lodge degrees. These degrees are based on the Scottish Rite, aka AASR, rituals. The Scottish Rite itself is based on a degree system that originated in France. This system then migrated through French colonies in the caribbean to the Southern part of the USA.

In New Orleans, Louisiana there are ten lodges remaining that practice the Red Lodge, aka Scottish Rite or French degrees. These can be performed in a variety of languages, as historically preferred by each lodge. They have special dispensation by their Grand Lodge to continue these traditions that are so different from the rest of the lodges in its jurisdiction. All ten of these lodges are located in the 16th Masonic District.