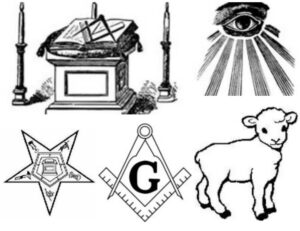 Freemasons use the terminology of stone masonry, geometry and architecture as symbols to illustrate the more complex concepts they want to instill in their membership. See the beehive that was discussed in a previous blog post. Another symbol are upright columns. They illustrate that Freemasons should always be upright in their moral conduct, meaning that they should not bend to societal pressure and compromise their beliefs.

Masonic symbology was used in past centuries, not due as much to Masonic secrecy, (as many people believe), but due to the fact that most of the world’s population was illiterate.

During the Dark Ages, the Middle Ages, and through subsequent centuries, most of the population, being working class, were illiterate or had only a rudimentary (basic) ability to sign their names, make their “mark” to signify their acceptance, or read simple words.

Operative stone masons would also travel to foreign lands to find work, and had to work with people who spoke many different languages. Symbols helped to communicate more complicated meaning amongst them. (1)

A popular definition of freemasonry is: “Freemasonry is a peculiar system of morality veiled in allegory and illustrated by symbols”

A related topic is the use of the terms symbolism and symbology. While they are related, they do differ in their meaning. Symbolism is the act of using symbols to represent the underlying meaning. Symbology on the other hand is the study of the use of symbols.