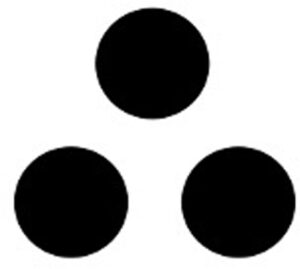 The first use of “∴” to abbreviate a Masonic title was August 12, 1774, by the Grand Orient of France, in an address to its subordinates. No authoritative explanation of the meaning of these dots has been given, but According to Mackey it is supposed to refer to the three lights around the altar, or perhaps more generally to the number 3, and to the triangle, all important symbols in the Masonic system.

The doubling of a letter is intended to express the plural of that word of which the single letter is the abbreviation. For example, in French, F∴ signifies “Frère,” or ” Brother,” and FF∴ ” Frères,” or “Brothers.” Similarly in English, L∴ is sometimes used to denote “Lodge”, and LL∴ to denote “Lodges”. Exceptions exist regularly; for example, Sovereign Grand Inspectors General is abbreviated as S∴G∴I∴G∴, and not S∴G∴II∴G∴.

The noted Masonic scholar Dr. Albert G. Mackey, 33°, used the phrase “three points” instead of the modern phrase of “three dots.” The following is how he deﬁnes the three points or dots in his Encyclopedia of Freemasonry:

Three points in a triangular form (\) are placed after letters in a Masonic document to indicate that such letters are the initials of a Masonic title or of a technical word in Freemasonry, as G\M\ for Grand Master, or G\L\ for Grand Lodge. It is not a symbol, but simply a mark of abbreviation. The attempt, therefore, to trace it to the Hebrew three yods [ייי], a sign of the Tetragrammaton, or any other ancient symbol, is futile. […] it is probable that the idea was suggested by the sacred character of the number three as a Masonic number, and these three dots might refer to the position of the three oﬃcers in a French Lodge. […] A common expression of anti-Masonic writers in France when referring to the Brethren of the Craft is Fréres Trois Points, Three Point Brothers, a term cultivated in their mischief survives in honor because reminding the brotherhood of cherished association and symbols.