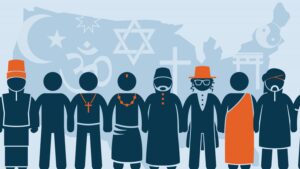 Freemasons are taught to respect their brothers and their ideas. Even if we might “know better”, we are reminded to restrain ourselves and show our brothers the same respect that we would expect ourselves. When we restrain ourselves from making a negative comment and interrupting them, we follow the cardinal virtues, mainly temperance, prudence and fortitude. These principles are today more commonly known as tolerance.

Freemasonry by its very core ideals teaches tolerance to all its members. We accept all men regardless of their race, nationality, ethnicity, religion, political affiliation, sexual orientation, wealth, educational level, occupation, shoe size or hair-length. It is about the internal qualifications, such as the character of the individual, and not the external such as appearances, that determine whether or not a man is a good fit for freemasonry and would be welcome into its midst.

Tolerance oftentimes is mistaken for inaction, but that is inaccurate. Even today we see a cycle of hatred, violence and intolerance spread across the globe once more. Violence and anger are easy emotions to fall back upon as a response. However, the only way to truly and enduringly combat and overcome these negative tendencies is to actively demonstrate tolerance, and to stand up for justice and the other cardinal virtues.

Possibly at no other time have the ideas of Temperance, Prudence, Fortitude, Justice and Tolerance been so important, not just for Freemasonry, but for the entire World. As Freemasons we need to rise above all the negative emotions and set an example as we stand as upright citizens by the virtues that we hold so dear.